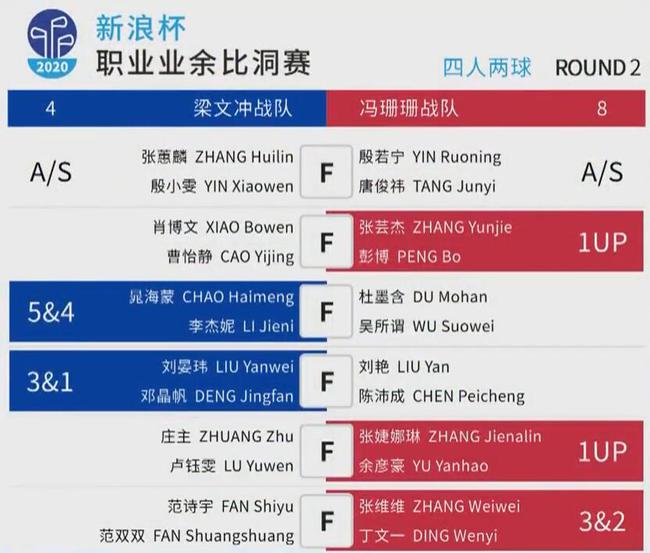 On October 16, Beijing time, on the first day of the Sina Cup professional amateur match play, after a fierce contest between a four-a-side four-ball match and a four-a-side two-ball match, Feng Shanshan led the Liang Wenchong team 8-4.

On Friday morning at Beijing Evergrande Palace Sports Park, 6 groups of four-ball matches, Feng Shanshan's team 4 wins, 1 loss, 1 tie, 4.5 to 1.5, 3 points ahead of Liang Wenchong's team; 6 groups of four-ball matches in the afternoon, Feng Shanshan's team 3 wins, 2 losses and 1 tie, 3.5 to 2.5, beating Liang Wenchong's team by 1 point. Tomorrow is the last day of the event, there will be 12 singles finals. The first team to win 12.5 points will win the "Sina Cup."

Zhang Huilin/Yin Xiaowen won the first point of the Sina Cup. They set off in the first group and took a 4 hole lead in the first 6 holes, and finally won 5 holes and 3 holes over Yin Ruoning/Chen Peicheng. Zhang Huilin/Yin Xiaowen continued to work together in the afternoon and faced Yin Ruoning/Tang Junyi. The battle has been fierce. Both sides did not lead more than one hole. The last hole Zhang Huilin successfully hit the green and won the hole, adding another half point for Liang Wenchong's team.

The third winning combination of Liang Wenchong's team was Chao Haimeng/Li Jeni. They won 5 holes in the two-ball match in the afternoon and defeated Du Mohan/Wu with 4 holes, but in the four-ball match in the morning, Du Mohan/Wu The so-called winning 2 holes and 1 hole left to defeat them, so the record of both sides is 1 win and 1 loss.

In the four-ball game in the morning, they did not lead the first 16 holes for a moment, but on the 17th hole, Zhang Jie Na Lin hit 12 feet with a 9-iron third shot, caught a birdie, and tied the game. On the 18th hole, she half waved her No. 5 iron to 20 feet, and then harvested another bird to help their team win a hole. In the afternoon, the four-a-side two-ball match reappeared in the morning. The owner/Lu Yuwen was still 2 holes ahead of them when they completed the 15th hole.

"I didn't expect it to be the result. It was very difficult in the middle because the opponents played very well. In the afternoon game, we were in the lead at the beginning, but Brother Chong (Liang Wenchong) appeared and their strategy changed. We The rhythm of the game is a bit disrupted," Zhang Jie Nalin said, "but I cooperated very well with Yu Yanhao. I made a mistake in the morning and he could withstand it. In the afternoon, we dealt with every shot seriously. I am very happy to achieve this result."

Zhang Weiwei/Ding Wenyi faced Fan Shiyu/Fan Shuangshuang in the morning, 3 holes to be beaten and 2 holes behind, but they caught two birdies and an eagle on the last three holes. They turned defeat into victory and won 1 hole. In the four-player two-ball match in the afternoon, she continued to cooperate with Ding Wenyi. On the 13th and 16th holes, Zhang Weiwei hit the side of the hole, Ding Wen went to the vicinity of the hole, easily caught two birdies, quickly ended the game, won 3 holes and 2 holes left over Fan Shiyu/Fan Shuangshuang again.

"The game in the morning was very tense. Ding Wen and I were unconvinced, but we always couldn't win. On the 16th hole, Ding Wenyi pushed into a 15-foot birdie putt. Let’s see. When I arrived at the hope, on the 17th hole, my three-wood almost hit the hole directly and shot the eagle. That shot was very exciting. I am very happy that I can do it." Zhang Weiwei said, "Shanshan's hope for our group It’s huge. This may be the reason why we didn’t perform at the level we should have at the beginning, but we’re very happy that we finally contributed 2 points."

Feng Shanshan said when evaluating the performance of his team: "I am very satisfied with this result and have no regrets. Our players have proven themselves. I said before the game that I hope to distribute equally so that every group is competitive. Only they have the ability to win. The hope of the game can prove myself. The process of the game was ups and downs and was very nervous. I am very proud that the team members did not give up. Faced with some bird-catching (moments), I almost cried when I saw it. As the captain, to be honest, I There is nothing that can help them apart from moving their mouths. These results are all made by them."

Commenting on the performance of his team members, Liang Wenchong said: "This result is expected. I have played in such team matches many times. I know it is not easy. What I regret is that all the teams performed in the first nine holes. It's very good, but the second half is behind. But the most important thing is to find the gap in failure. Only in this way can you succeed in the future."